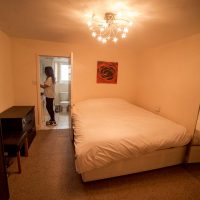 We are the UK's first Digital Nomad House - pioneering stuff.  We provide 14 private rooms to Digital Nomads from all over the world who want to get some work done during the day and have fun in Blackpool at the weekends. We are nearly done, it's all about painting and getting ready to open. The house and the culture of the places are similar to a backpacker hos. 4 story Victorian house, 5 mins from the beach.

I was happy to be part and help on this renovation of the house.

The work you did 8

The work was mainly what we agreed on and the host was quite flexible in finding jobs which were more suitable for me, i.e. mostly painting and decorating. We stuck to the work hours of 8:30am to 1:30pm and were able to socialise and travel to some nice areas nearby in the evening to wind down. There was an issue with the kitchen and shower to begin with with cold running water in kitchen and the shower was a bit blocked but this was later fixed and I understood the house was in need of renovation so wasn't a major shock. Was paid on time and taken to go shopping so overall was a good experience.

I've spend a month working for Duncan and had a great time.

We run a tight ship. 5 hours of work a day, 5 days a week. Work hard play hard is the tempo.  You will be working with the owner of the ho and other volunteers, having a laugh with them and learning building skills as you go. You have your own room, as we are a ho and no open yet. Three meals a day are provided for you. You cook yourself in a fully fitted kitchen. As long as you are a self-starter and happy to work hard and work smart, you will be well taken care of.

Working Traveller – Learn to earn your way around the world

Don't forget to add your WT pics to #workingtraveller to be featured on our Instagram.